Another place which was on our travel list was China. We were anxious because we had heard mixed things about our “motherland” – it was going to be crowded, hectic and a huge culture shock. We arrived only expecting the worst, but we came out of it with a greater love and appreciation for the country, its people and our heritage.

At this stage we were joined by Nathan’s sister who had just finished university exams. We were ecstatic to have her join us in China, especially after travelling mainly with only each other for around about 10 months. I figured that with her Chinese skills we would be able to get around just fine.

Our trip to the Great Wall of China was a bit of an adventure to say the least. We chose to go to a lesser known unrestored part of the wall. We hired a private taxi (organised through our courtyard (hutong) hotel (which was a great place to stay – we highly recommend it for a slightly different accommodation option in Beijing) to take us to what we read on the Internet as the wild Great Wall.

DISCLAIMER: I’m not sure exactly where along Jiankou we started, but it became apparent that we weren’t going to be able to make it to Mutianyu from here because the path became inaccessible (and we perceived it to be far more dangerous than we could handle) and perhaps too far away. 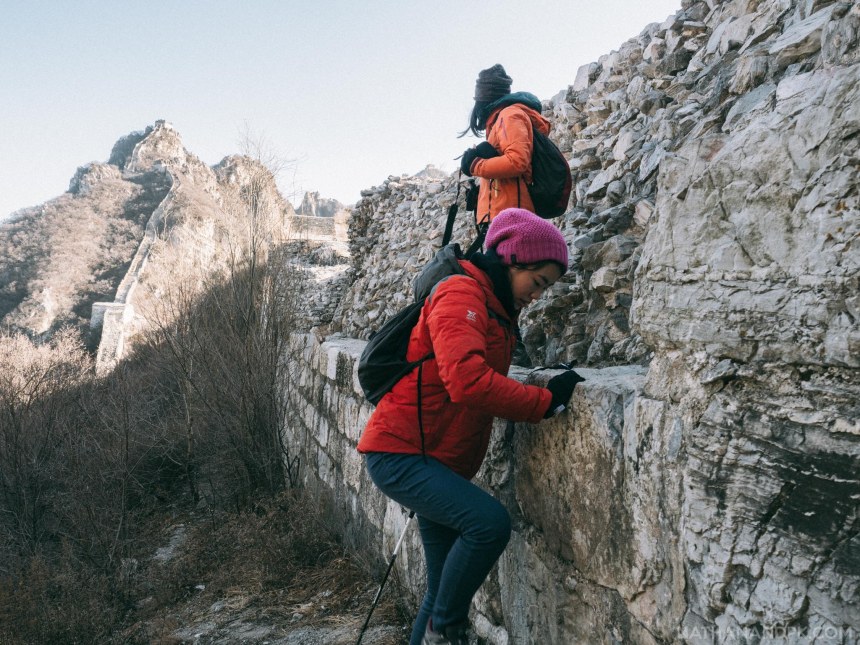 We hiked from a dirt trail for about 15 or so minutes and finally the wall was in sight! Our taxi driver, who was curious as to how we found out about Jiankou (and why we decided to go there), took it upon himself to make sure we got to the Wall. After dropping us off, he parked his car and hiked (very quickly) and met up with us – which we were not expecting at all! It turns out that he enjoyed hiking and loved hiking different parts of the Great Wall whenever he took tourists there. He said Jiankou was one of his favourite parts of the Wall because it was quiet and rugged. 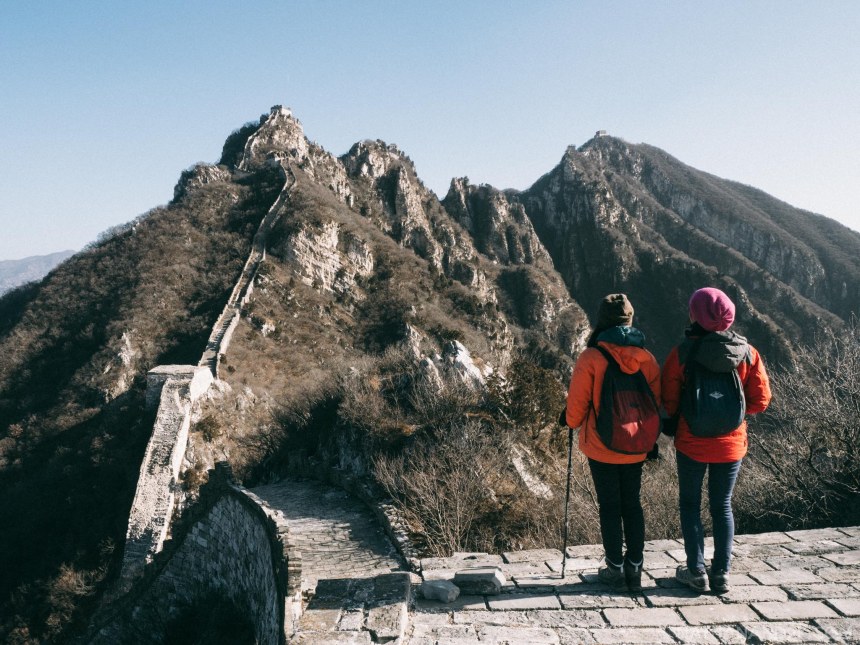 Our goal was to walk from Jiankou to Mutianyu, which, from our research, should take us about 3-4 hours. We told our driver to drop us off at the start (Jiankou) and meet us at the car park of Mutianyu. We were going to be in contact by WeChat, China’s own instant messaging service. The path was “reasonably clear” from here – walk along the Wall and we should get to Mutianyu, a restored section of the Wall (which most tourists go to, along with Badaling)

After hiking up and down the rubble for three hours, we looked at our GPS (yes, the trusty ol’ Garmin InReach) and realised we weren’t even halfway from where we needed to be! Not only that, the path became more treacherous and seemingly impassable. We then decided we should just head back to where we started – because if we had hiked for three to four hours and weren’t even at the intended starting point, we might end up stranded in the cold overnight on the Great Wall of China! And by then we had our fun being on the Great Wall.

Thankfully with the small amount of cell reception we had, we sent a WeChat message to our driver in broken Mandarin (unsurprisingly he only spoke Mandarin and my Mandarin is sub-par at best..), hoping firstly that he received our message, and secondly that he understood it.

Would I recommend anyone to go to Jiankou? Totally – just make sure you know exactly where you need to go or where your driver/guide is taking you! Of course you would be in good hands if you went with a local guide, but we are all for carving our own adventure: which I wouldn’t say is for everyone because the most important thing is being safe and knowing your limits. I was definitely anxious and hoped our driver received and understood our message – otherwise we would have been stranded!

I think what happened was that our driver took us to the Jiankou part which was much further west from the part where most tour groups started – which would explain why we weren’t even at the start after three or so hours of hiking! We still had a wonderful time and were so thankful for the opportunity to hike the Great Wall of China with most of the Wall to ourselves.